PARADISE — Jerry Kirk stood in the parking lot of a burned-down Safeway shopping center with a group of other cowboys, plotting a rescue route on their cell phones.

Towing four horse trailers, the group headed to a home in Paradise, where a woman reported that she had to flee without her eight horses. Kirk made it just a few miles before a woman from another rescue group flagged down the caravan. She had found a German Shepherd, its feet badly burned, near downed power lines off Clark Road. She wanted to know if they had space for the pup.

Kirk, who lives in Cottonwood in Shasta County, has been rescuing animals since the Carr Fire in Redding, when he desperately wanted to help. He posted a message on Facebook and quickly residents there pleaded for help finding their animals in areas where the public couldn’t return.

Working with the California Department of Forestry and Fire Protection, Kirk was allowed past the barricades in Paradise Saturday. He had received more than 500 calls from Butte County residents asking for help rescuing cats, dogs, llamas, goats and horses. He wouldn’t be able to get to many of them.

“The fire came on so quick, people had to leave their animals,” Kirk said.

Kirk’s group headed to the address where the owner was forced to leave her horses. They didn’t know what to expect when the pulled past the charred remains of home after home as they approached the property they were looking for.

The woman’s house was reduced to rubble. But on what used to be the front lawn were the eight horses, huddled together. Two had burns and needed veterinary care. The group carefully loaded the scared and somewhat cantankerous animals and headed down a rural and smoky Clark Road toward Oroville to return the missing herd. They passed blacked crashed cars left abandoned on the roadside as darkness set in. 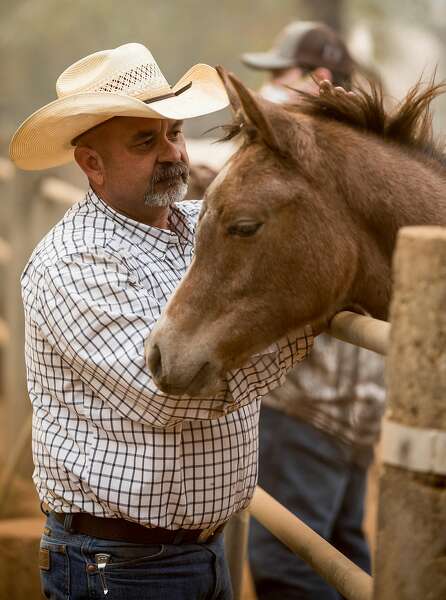 This was a happy ending, the kind Kirk enjoys. Too often, he delivers heartbreaking news of family pets and animal companions that did not escape the flames. He tears up just mentioning those moments.

“You’re OK now,” Kirk said, stroking a brown foal as it nuzzled him.

As night fell, Kirk headed back into the devastation, hoping for one more rescue.