By BuzzDeptTeam
9 months ago9 months ago
5views
0
ShareTweet
, 0 points

For conservationists trying to provide safe routes for animals to move from one habitat to another, our cities could provide a vital stepping stone on their journey, according to a report published today in the journal Ecology.

The researchers compiled data from 70 studies covering 78 species (mostly insects, but also some mammals and birds) and found that in over 70% of cases, animals moved faster through “lower-quality” habitats.

“Low-quality” habitats are essentially places where a species can survive, but don’t have everything it needs to complete its life cycle. For a butterfly, that would be somewhere that provides food, but may not have the specific plants the butterfly lays its eggs on.

For pollinators like butterflies and bees, cities and suburbs could fit the bill, as long as those environments include enough “high-quality” habitat where a species can successfully reproduce. And providing enough high-quality in habitat in cities could be as simple as us planting more flowers in our gardens.

Read: Five things you can do to protect our insects from population collapse

Lead study author Elizabeth Crone, a professor of biology at Tufts University, in Massachusetts, says that conservation planners often assume that the best way to help a species expand its range is to create corridors of its natural habitat. But her analysis shows that need not be the case.

“As a landscape planner, don’t write off more developed areas, with the conservation potential of having more native plants in people’s yards and city parks and roadsides,” she said.

This reasoning is that when many animals are in a less favorable habitat, as long as they can still survive, they will move more quickly to the next breeding area.

As well as analyzing previous studies, the researchers used mathematical models to calculate range expansion for the Baltimore checkerspot butterfly as a case study. They found that for it to move optimally through a landscape to expand its range there should be about 15% high-quality habitat — meadows and grassland — and 85% low-quality habitat — like hayfields.

But with enough people helping out, residential areas could potentially make an effective substitute for hayfields.

Read: Bengal tigers could vanish from one of their final strongholds

To help wildlife, residents don’t even need to know what plants are favored by which butterflies. If people were to simply put their favorite native plants in their gardens, Crone says we could end up with certain gardens having plants needed by one particular butterfly species, and other gardens having the plants needed by another species. “Together as a neighborhood you could have plenty of butterfly habitat,” said Crone.

Chris Thomas, a professor biology at the University of York, in the UK, cautions that it is still essential to maintain high-quality habitat in our landscapes, where species can reproduce. 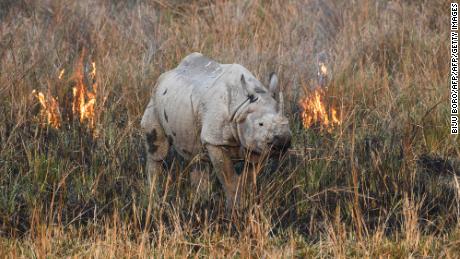 “Ultimately you’re still going to need lots of high-quality habitat in the landscape because these distribution changes are taking place over tens and eventually hundreds of generations. It’s not all about movement of individuals, it’s about their reproductive success when they get anywhere,” he told CNN.

Read: Study suggests insect populations have declined by 75% over 3 decades

“The bottom line is you need both kinds of habitat — you do need things moving about if they’re going to track climate change and move through fragmented modern landscapes. On the other hand, you need high-quality breeding habitats if anything is going to move anywhere.”

Crone says the study has inspired her to think about how to make it easier for people to create wildlife-friendly gardens.

“There’s a few more steps before we can say definitely this is great,” she added. “Can butterflies fly over a parking lot safely? Are people using pesticide in their yards? But I think most likely with modest changes like using fewer pesticides, suburban landscapes can become really high-quality habitats.”