It was unclear what was wrong with the feathery phoenix and animal rescuers were not sure what to expect at first.

“This is one of the strangest casualty circumstances we have seen in a while!” declared a Facebook post from Tiggywinkles Wildlife Hospital, where the bird was taken.

According to the hospital in Buckinghamshire, UK, the bird had somehow doused himself in curry or turmeric, which prevented him from flying properly.

Vinny, named by veterinary workers in honor of the Vindaloo curry he was covered in, had a “pungent smell” but was otherwise healthy, the hospital said.

All he needed was a bath. Rescuers were finally able to clean the curry off of the herring gull after he put up a bit of a fight and covered the veterinary team in curry water. 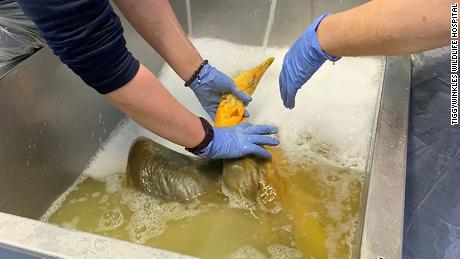 A seagull covered in curry was rescued by an animal hospital

Now that he’s been thoroughly scrubbed and returned to his natural white coloring, Vinny will soon be ready to fly free, but hopefully not into anymore curry dishes.

Strangely enough, this isn’t the first time a seagull needed a good cleaning after taking a curry bath.

In 2016, another seagull fell into a vat of chicken tikka masala as he tried to enjoy a meal.
That seagull was also rescued and taken to Vale Wildlife Hospital & Rehabilitation Centre in Gloucestershire, England, where he was cleaned up and released.

“We’ve cleaned him up and he is doing well, with no upset tummy! Hopefully he’ll stick to a much more bland diet in the future!!” Lucy Kells, a veterinary nurse told CNN.

Cougar continues to hunt for pets and small animals in...