By BuzzDeptTeam
1 year ago1 year ago
9views
0

Muslims from around the world flock to Mecca as the Saudi city braces for 2.5 million worshippers ahead of hajj pilgrimage tomorrow

More than 2.5 million Muslims will tomorrow begin the annual hajj pilgrimage in the Islamic holy city of Mecca, Saudi Arabia.

Crowds of worshippers have already begun to gather in Mecca in the days ahead of the hajj, the six-day focal point of the Islamic calendar.

Believers from across the world wore flowing white robes as they descended on the holy city located in the west of the ultra-conservative kingdom.

The pilgrims will undertake religious rites that have remained unchanged since the founding of Islam 1,400 years ago.

‘Islam united us. We are all together… so that’s why I’m very happy,’ said Leku Abibu, 46, a Ugandan mechanic, adding: ‘I’m enjoying it here.’ 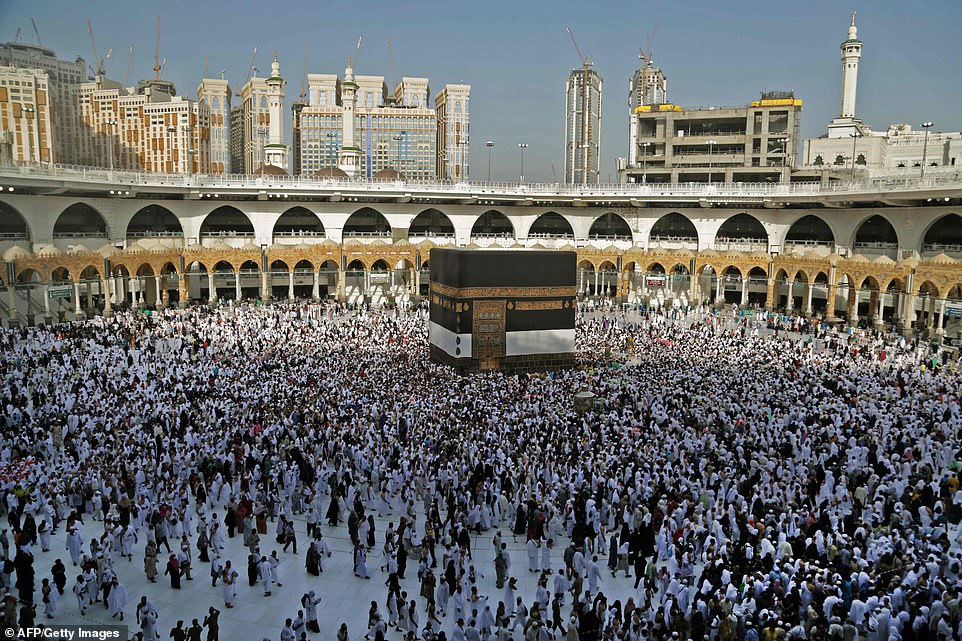 Mulism pilgrims gather around the Kaaba, Islam’s holiest shrine, at the Great Mosque in Mecca today as they prepare for the start of the hajj pilgrimage tomorrow 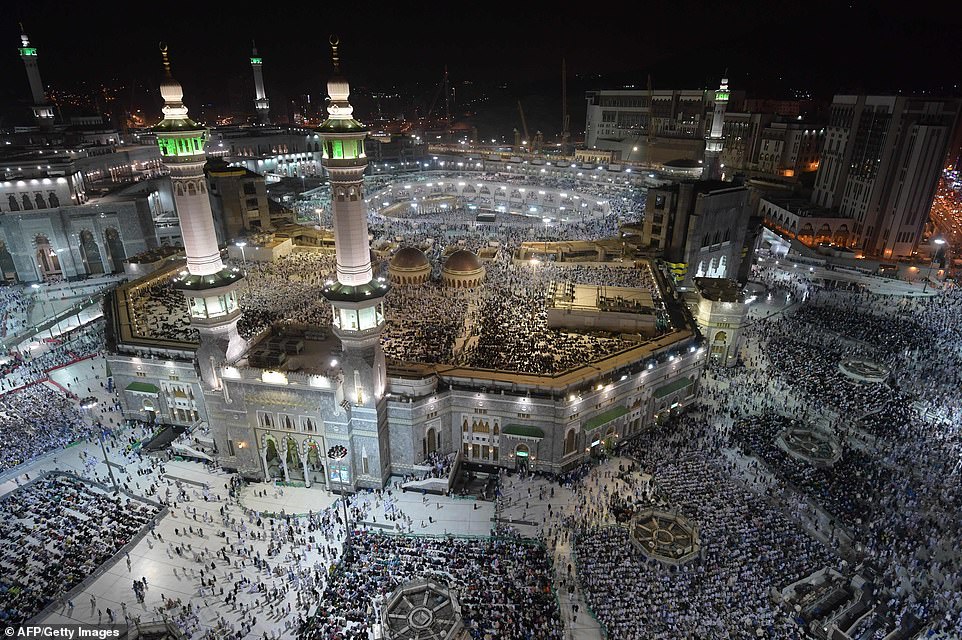 The Great Mosque in Mecca is lit up at night as thousands of pilgrims gather there on Wednesday night. Some 2.5million Muslims are expected to flock to the city 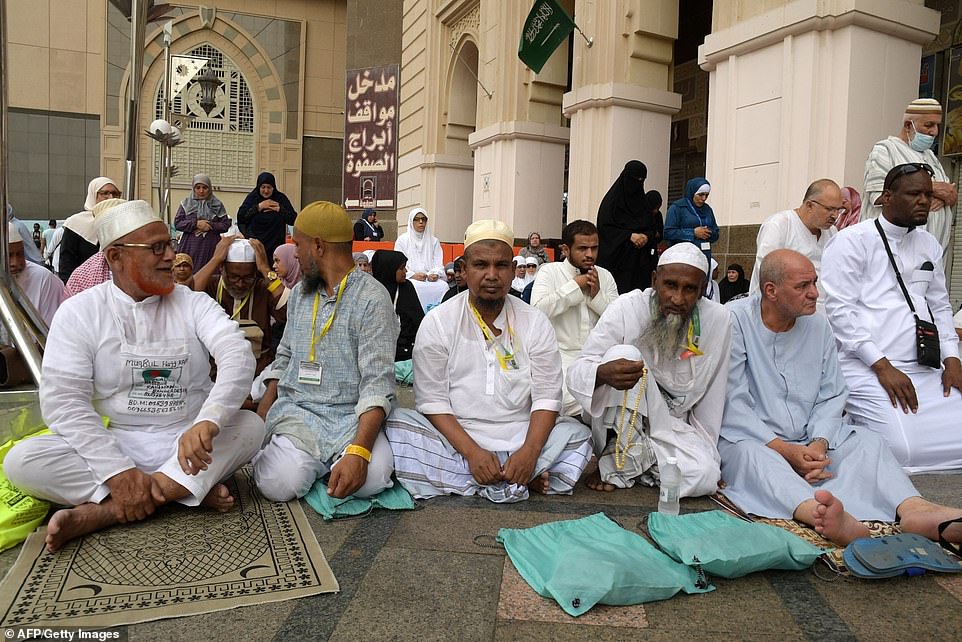 This year’s hajj takes place amid tensions in the Gulf region exacerbated by a series of attacks on oil tankers, drone strikes and interceptions of maritime traffic on the high seas.

Saudi, the Gulf’s leading power, and its ally Washington accuse Iran – Riyadh’s regional rival – of being behind the attacks and sabotage operations against commercial shipping, but Tehran has denied responsibility.

Despite the absence of diplomatic ties between Saudi and Iran, some 88,550 Iranian pilgrims are due to take part in the hajj this year, according to the Tasnim news agency.

Hajj is one of the five pillars of Islam and Muslims must perform it at least once in their lives if they can afford to.

‘There are all nations of the world, all languages. There are no differences between us,’ said Nurul Jamal, a 61-year-old pilgrim from India.

Mecca, closed to non-Muslims, is home to the Kaaba – a cube structure draped in black cloth embroidered in gold located at the heart of the mosque. 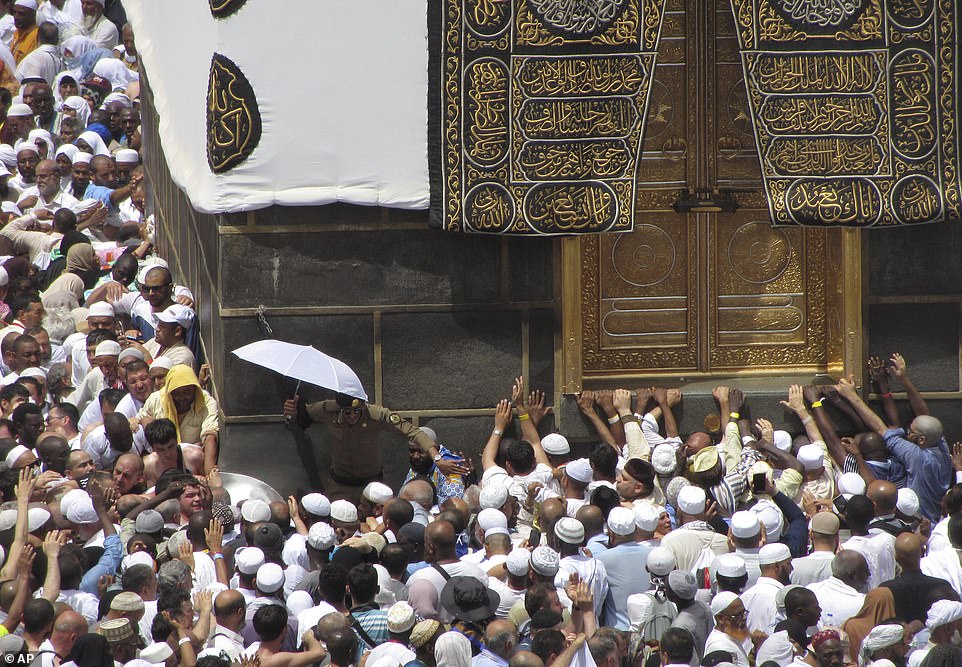 A dense crowd of pilgrims walks around the Kaaba, the cubic building in the Great Mosque which Muslims face towards when praying the prescribed five-times daily 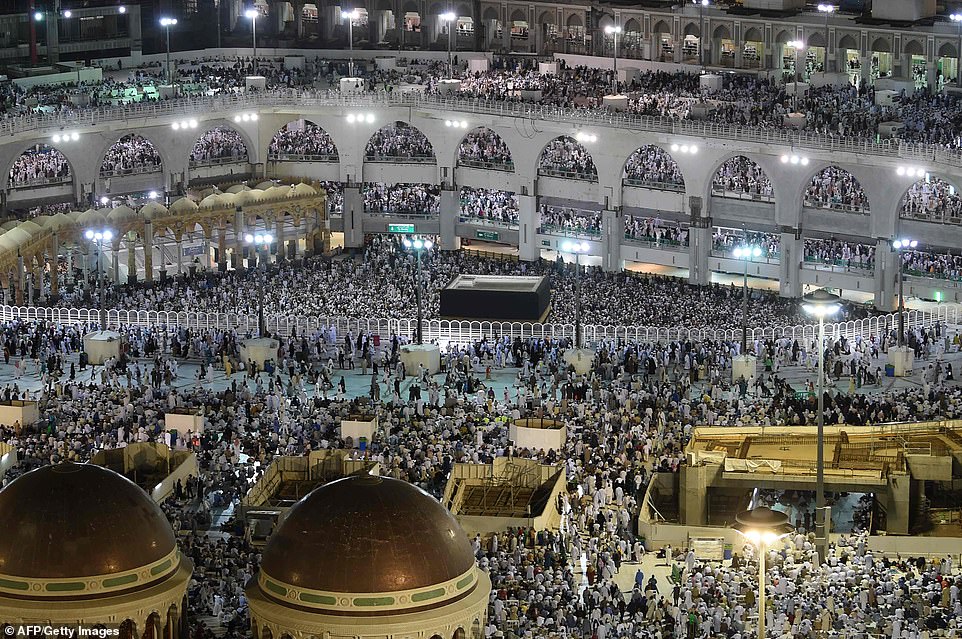 Mulism pilgrims wait for a prayer around the Kaaba, Islam’s holiest shrine, at the Grand Mosque in Mecca on Wednesday night

The Great Mosque of Mecca with its Ottoman minarets sits amid skyscrapers that host upmarket malls and luxury hotels.

Muslims face toward the Kaaba when praying the prescribed five-times daily. Pilgrims circle the Kaaba seven times and perform a number of sacred rites.

While waiting for the beginning of the hajj, worshippers roam the esplanade or pray in the mosque in stifling heat.

Traffic in the city is extremely heavy and the air quality is poor. The odour of exhaust fumes mixes with the smell of bitumen emitted by the heated road surface and many pilgrims wear face masks. 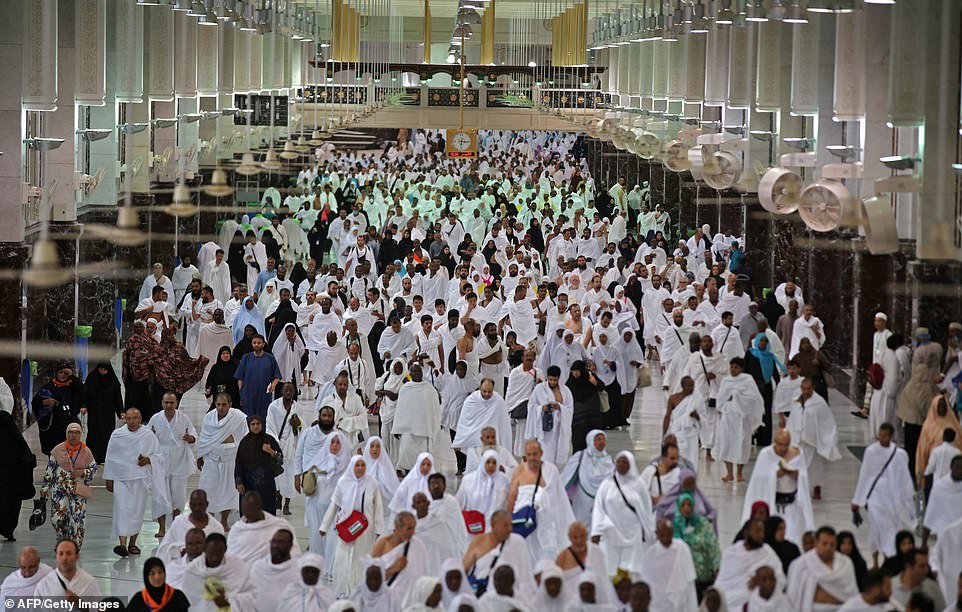 Pilgrims wearing white robes leave after morning prayers today. While waiting for the beginning of the hajj, worshippers roam the esplanade or pray in the mosque in stifling heat 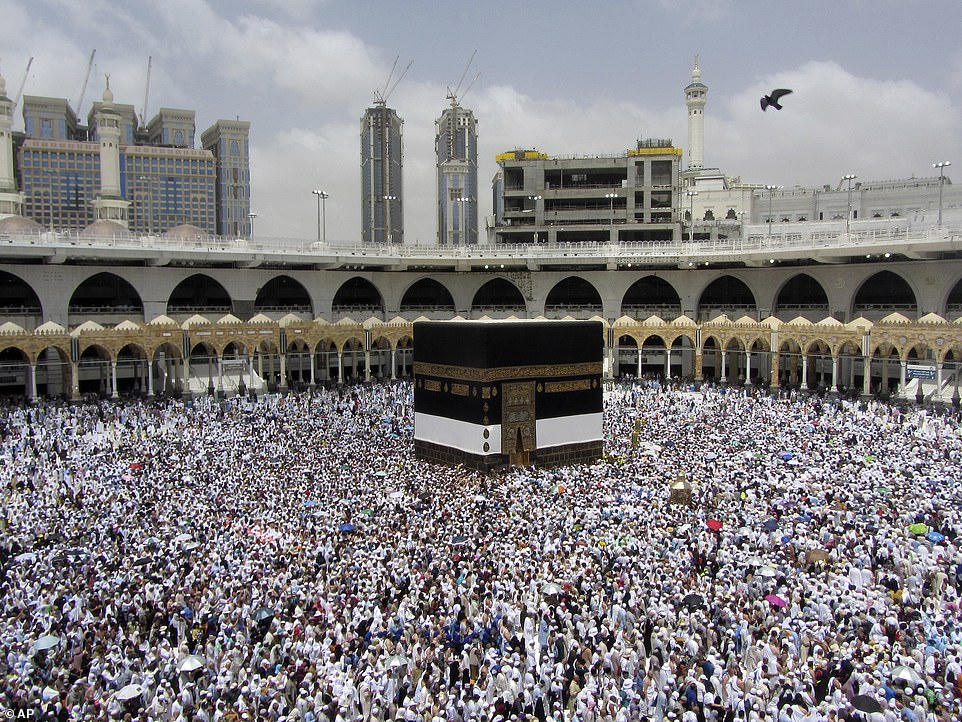 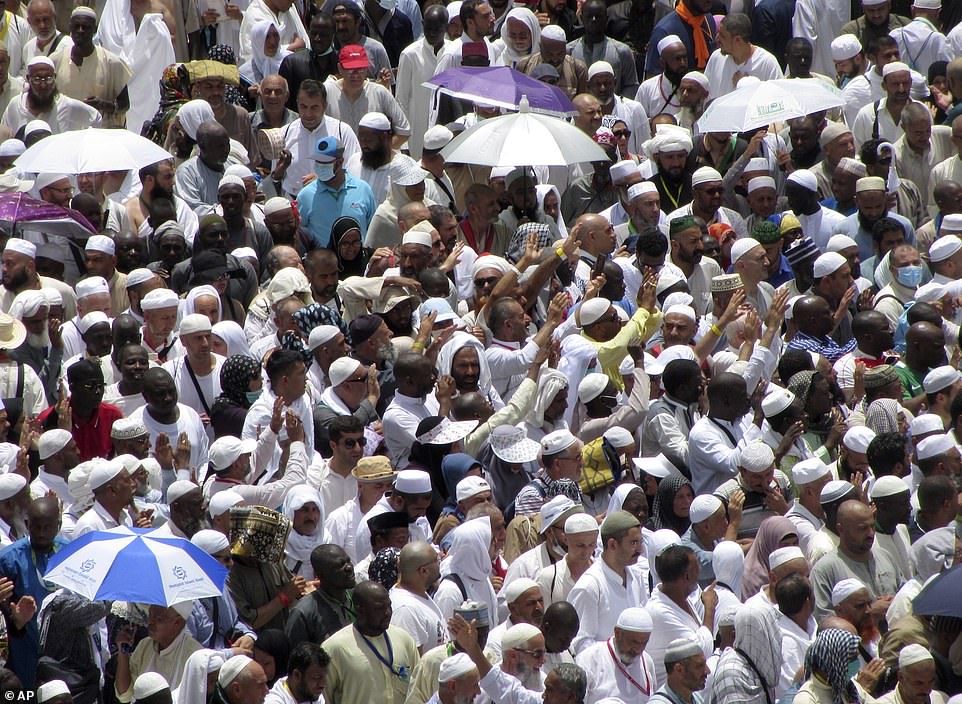 A crowd of pilgrims, some of them holding umbrellas, at the Great Mosque this morning where temperatures can surpass 104F

Away from prayers, many of the faithful visit the innumerable shops that speckle the Holy City.

Religious tourism brings in revenues worth billions of dollars, but the vast gathering also presents major logistical and safety challenges.

In 2015, some 2,300 worshippers were killed in the worst stampede in the history of the hajj.

Since then Saudi Arabia has sought to reassure pilgrims, deploying tens of thousands of security officers and installing cameras to oversee every corner of the holy sites.

Even though the hajj lasts only five days, many pilgrims arrive weeks before and linger in the city.

The total number of arrivals is limited however as each Muslim country receives a pilgrim quota.

Some worshippers have spent years on waiting lists – sometimes as long as a decade – just to perform their religious duty.

Outside of the hajj, Muslims can also undertake a lesser, year-round pilgrimage known as umrah.