For a school contest in 2017, Gianessa Wride’s mom decked her head with sparkly butterflies and flowers and the look turned out to be a winner 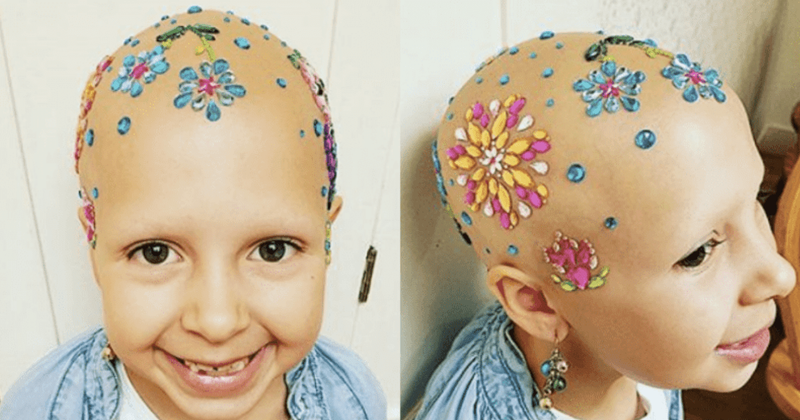 While Gianessa Wride’s mother, Daniella, was brushing her daughter’s hair back in early 2017 she noticed that clumps of hair would come off the back then 7-year-old’s scalp. The family from Utah later found out that the little girl had the autoimmune disease, alopecia. A result of the disease is that her hair and eyebrows would never grow back. “It was upsetting to her,” Daniella Wride told PEOPLE, “and it was hard for me as well, but not because of what she looks like. I was more upset thinking that somebody might bully my daughter and I didn’t want her to ever feel less beautiful than she is.”

The mother-daughter duo soon found out that the school Gianessa studied at was going to run a Crazy Hair Day competition during “spirit week”. This sparked an idea that Gianessa’s mother came up with it. Her daughter hated wigs and scarves wouldn’t hold properly around the little girl’s head. Daniella decided that it was time Gianessa celebrated her bald look and even offered to deck it up with adhesive jewels. She headed to the scrapbooking department at a local discount store and picked up the glittery stickers the little girl absolutely loved.

Her mother played around with the patterns making a colorful owl, butterflies, and flowers too. While Gianessa was a little nervous on the day of the competition Salem Elementary schoolmates ended up loving her look. She also ended up winning first place in the crazy hair competition. “So putting stick-on jewels on her head really is a good fit for her personality,” Daniella said. “And it adds some fun to what could be a stressful time for a girl with no hair. It’s my hope that she’ll continue to want to be herself and express herself in any way she feels comfortable, as she grows older.” The little girl admits that she was sad to lose her hair but is making the best of her situation.“I was sad at first when I lost all my hair,” she tells PEOPLE, “but now I love being bald. I can do things to my head that other kids can’t. I’m thinking now it might be fun to decorate my head with some sparkly butterflies and flowers.”

In 2018, her mom posted a picture of the little with sparkling stones entwined on her head and she wrote: Crazy Head Day 2018🌷I asked Nessa what she wanted to do this year and she replied, ” I want to be covered in diamonds!” Spoken like the true princess she is. Seriously, not sure there is more of a past life Queen than this young lady.

Gianessa loves sparkly things like most young girls and would love to become a fashion designer someday. Her mum is a registered nurse and they live with her dad Tyler and she has two other younger siblings Liam and Killian. Daniella hopes the posts of her daughter would spread awareness on the disease and that would inspire others to embrace themselves, hair or no hair.  “Your hair doesn’t make who you are — it’s what inside that counts,” she tells PEOPLE. “That’s what we tell Gianessa. People feel inspired by her, and that’s wonderful. We’re hopeful that she’ll show other bald kids that they can also embrace their baldness and can rock any look they want, in any way they can.”

Photographer Captures The Precious Moments Of What Happens In Nature...